I have never met or raced against Thomas Turner PRO (Outspokin) but I do like to admire him from afar. It seems that no matter the length or intensity of the race he is always a contender. Even after a bad crash and shoulder injury this summer he came back strong for the national MTB championships and now in the Fool's Gold 100 MTB endurance race, placing second to Jerimiah Bishop. In the local MTB series he is somewhat without peer and even in takling a stab last year at cyclocross he showed he can win races and place high in the series. He is also a douoble GA single-speed champion in the open category and set the course SS record last year at Ft. Yargo. I look for him to tri-peat this year.

Greg Turner (no relation) is also a massive talent. A local/regional legend, whose name invokes groans from others in his race, shows year after year he can win a various distances and disciplines. He has used his abilities to win cyclocross, road and MTB races on a consistant basis in the masters category. He is also a GA SS champion in the marathon and just placed 1st on the SS in the Fool's Gold. It would be wonderful to see the Turners battle in the SS championship.

Jason Chapman and I first crossed paths in cyclocross and he was racing only on a single-speed cross bike and dominated the B race series. In fact, most all he races is either single-speed or fixed gear. He is the fixed gear SS MTB champion in Georgia and when he races I am always amazed at his speeds and his gearing on the SS MTB.

Shey Linder organized the SS championshups in GA, is a co-promoter of the GA CX series, Pro MTB racer and likes a lot of endurance distances races. He is quiet and reserved but on the bike I would say not laid back. He is very competitive and if he is not winning, he is placing very high. Besides his racing, his training and judgement about a lot of cycling related issues is invaluable. Because of his leadership and skill he is one person to definately have on your team.

Shane Schreihart races expert MTB and endurance MTB mostly on a SS bike. He takes on all comers in the expert division on the SS and seems to not care what gear(s) you use, just that it is a bike and it rolls. His high placings on the SS bike against fellow geared riders is impressive. He is also very mentally tough as displayed in a 12 hour MTB race (Dirty Spokes) last spring where he did 12 hours on the SS.

"Markie Mark" Stewart is another MTB racer who after performing at a hig level for years, picks and chooses his races now and many of them are distance endurance races. He has a great tactical sense and is also great at pacing. But, (like Shane) his mental toughness really impresses me also. I have never seen him give up and he always seems to maintain a positive attitude in ther midst of suffering.

There are lots of other folks who might make your list, and probably a few I have left out here (no offense). These are just a few that have stood out to me this year.
Posted by APBIORoswell at 6:52 AM No comments: Links to this post

Went to Ft. Yargo State Park today to ride the fine MTB trails. I wanted to do a good 3 laps (31 miles) to build up some stress. The trail had been blown clear and it was a great ride. Torre Smitherman and Theron Colucci met me there and we rode together and also did our own thing. I think all of us are going to give the SS champs a shot.

Cross practice actually starts next Sunday (!) but I am not sure if I'll go to the first one since it tends to be more mellow. I need to keep up my TSS/CTL until a week before the SS Champs. I usually get 100 TSS with the pre-ride and cross practice but the first few practices are more oriented towards skills. We'll see.

I'd like to check out East Macon Park in 2 weeks as well.
Posted by APBIORoswell at 11:12 AM No comments: Links to this post

School has begun with new students staring at me wondering what the year will bring. I took the liberty to ride a lot this summer and I have committed to coaching soccer next spring and summer school next summer.

With the SS champs only 3 weeks away my weekly hours will decrease by 3 or 4 and my CTL may drop a bit. The plan is to get it as high as possible before that race weekend, peak at around +20 and then salvage what I can for cross. With the Gloucester race in mid-October I should be pretty fresh but I have a bunch of traning all fall to get to nationals. Probably will not care about results for the GA CX series and try to just use them as a means to an end.

Brendan Sullivan is pretty much winning at will these days and his passion is cross so either he will burn up with all this racing (not likely) or he will enter the CX season ready to destroy. I just hope he can keep it cranked up until December. I really think he can get on the podium in December if he show a little restraint, does some longer A races this fall and maybe goes to 2-3 UCI races. Either way he is very talented and has come a long, long way in 2 years.

Grearing for the SS champs is going to be interesting. I have heard that a 2:1 might be too hard. I won't get to pre-ride so I will probably take 2 wheels. I may elect to try and push a 34x16 for the TT depending on how long it is.

The intervals in the picture below were 45 second intervals at or above 400w. I did 2 sets of 8. They look hard but on a good hill they are not really unbearable. I find the extended VO2 max intervals like a 5x5, 8x3 or 10x2 at around 330w to be much harder to do and I really have to take it easy the day before if I want to complete them, especially in the mid-day heat. I like the threshold intervals these days because compared to the VO2 max intervals they are pretty mellow. After the SS champs I will have to work on leg speed and sprints since I am not doing that stuff right now. I assume I will be doing some sort of microburst workouts at some point or maybe pyramids and they usually bring my lunch up in my throat. Very hard.
Posted by APBIORoswell at 5:00 AM No comments: Links to this post 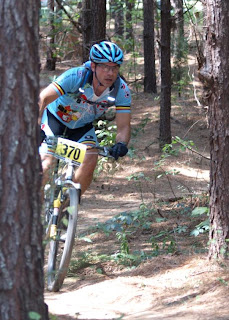 The last GCS MTB race of the year and my first foray into the expert class on my single-speed. I used the 34x16 since the course was flat but some new hilly sections were added days before the race. I divided the course in thirds mentally. The first third was flat and ended on an uphill where a water station was (two cups poured on my head each lap), the second third consisted of the hilly bits and the last third was mainly flat. The heat was nasty and the heat index was 105 but it was the same for everyone.

I elected to go with a 70oz bladder frozen into slush for the first 3 laps and then I went to a water bottle when that was dry. I had no support team so I actually had to stop and get my drinks on the last lap.

I went out hard with the lead group on the first lap and hung in there no problem until 2/3 into the lap. I backed off knowing we had 4 total laps (30 miles) and I was hoping they went out too hard. The SS gearing was nice for the course and I did not have too much trouble holding on to them but I could tell there was no way to keep that up for 2.5 hours.

I had a crash at the end of the first lap and the local hero Monty got by me and I thought I would catch him but he was gunning for 4th and I did not see him again.

The rest of the race was great. I went at my own forced pace and had a lot of fun. I ended up 5th which was a nice result I think.

The GCS series is nice but honestly I prefer the SERC courses. I did not get to do Raccoon Mtn and I'll try that this winter.

Next up is the GA SS Champs also in Macon but on a harder course. 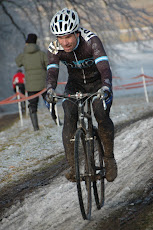